The JukeBox: or the mental loops we play

I was having a cup of coffee with my good friend Tom LaRotaonda the other day and we were talking about how it happens that people will often replay a script when triggered. It happens in all sorts of ways. I remember when I was selling collection services. I had stories about the letters we sold and why they worked. I had stories about why our reporting was better. In fact I used to call it a juke box. Ask me about letters and I would reach into my head and pull out that story. And that is fine when we are aware that we are doing it. What happens when we are not?

In 2013 I was terminated from a job. The more raw answer is I was fired. And then I had a story I told myself about that for two years. And that story did not serve me. I told myself it was all my fault, I told myself I shouldn’t be in that business. I told myself I didn’t deserve it. As a result I was less than successful in my new career.

I recently spoke with someone who has a story about wheat and gluten. We were talking about population growth and the tape that ran (I’ve heard this tape before) was wheat was a way to keep the servants alive long enough to procreate. There was not enough nutrition in bread to be completely healthy. They could work, have kids and then they would normally die. Even the Bible says, “You can’t live on bread alone.” 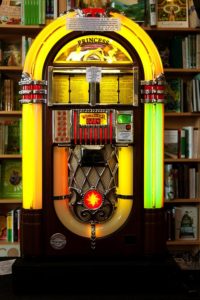 And the tape goes round and round

This might be true about population growth. I was describing a video about the growth of humanity from the beginning to today. And that, triggered the gluten story. For me the video was fascinating in that it showed that for most of Human existence man lived in Africa, India and Asia.

You may be familiar with the work of Dr. Joseph Bargh, who ran a test where participants were asked to perform a word puzzle. For one group the word puzzle had words indicating elderly. It had words like Old, Florida, and Slowing Down in it. The other group performed a word puzzle with neutral words. Both groups were then asked to walk down the halls to participate in another test.

In reality it was the walk down the hall that was the test. The group that was primed with worlds indicating elderly moved significantly slower down the hall.

So we are all triggered and then we run mental loops. How do we manage those loops? Here are a four suggestions: